Approximately 835 people in British Columbia will be diagnosed with pancreatic cancer this year. While pancreatic cancer remains one of the most deadly cancers, new research recently published in Cell Reports Medicine has identified a new combination treatment that may overcome drug resistance in pancreatic cancer.

The work, co-led by BC Cancer Research Institute Distinguished Scientist Dr. Shoukat Dedhar, post-doctoral fellow Dr Wells Brown, and staff scientist Paul McDonald, have uncovered a novel combination treatment strategy that prevents a type of pancreatic tumor called pancreatic ductal adenocarcinoma (PDAC), from adapting to and resisting treatment. Building on an existing understanding that over 95 per cent of PDAC tumours have a mutated gene (KRAS) which causes the cancer cells to grow and speed up spread, this study has found a combination treatment which prevents the mutated gene from activating compensatory enzyme complexes called mTORC1 and mTORC2, which control the ability of the tumour cells to make more proteins for growth and prevent the cells from dying – two key traits that make these tumours so aggressive.

"Therapeutically targeting genes that drive the malignant progression of tumours is the main objective of precision medicine for cancer,” says Dr. Dedhar. “However, adaptive resistance to drugs that target such proteins is also a major hurdle. This work identifies one approach to overcome this hurdle for pancreatic cancer and demonstrates that the drug combination used can prevent drug resistance at the outset which can result in longer-term suppression of tumour growth and spread.”

Drs. Brown and McDonald meticulously dissected the cellular pathways that lead to adaptive resistance and identified a combined treatment that could both cause the tumours to regress and prevent the tumours from spreading – which is the major cause of mortality in patients with PDAC. 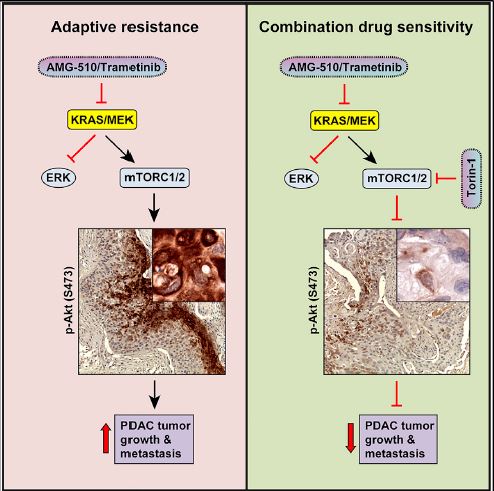 Identifying this combination treatment now provides a new hope for treating PDAC and identifies a precision medicine therapeutic approach that can be implemented in clinical trials quickly as the drugs are already available for clinical use with other cancers.

“We are looking forward to seeing the results of the clinical trials,” says Dr. Dedhar. “Pancreatic cancer is one of the most deadly cancers but we are making progress every day by better understanding how the tumours grow and spread and then preventing them from doing so.”